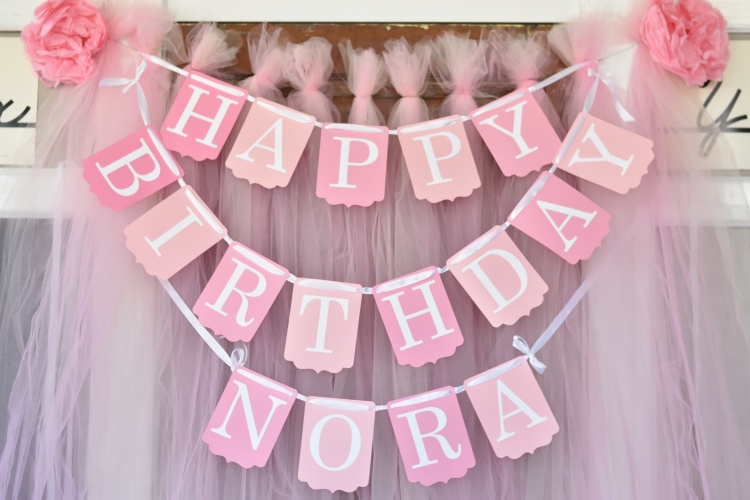 Last month, on the day Nora turned one year old, Danith and I started out early, before the sun fully rose. We met Nora’s God-Aunt and God-Uncle at Dunkin Donut for our lattes, and then we all drove out to the historical society, where last November Danith and I paid a deposit to use its classrooms. The building was once a grade school, and even though most of its spaces have been renovated, the old school feel remains. Visitors could see actual blackboards, cursive alphabets running above the boards, old wooden student desks, and retired 60’s cheerleading uniforms from the nearby high school. The small brick-building is quaint and charming, and I felt it would be the perfect setting.

Initially, I had been reluctant to hold a large party for Nora’s first birthday. Before she was born, I heard some people ridicule the idea of a big soirée for a child, and I heard other people remark that any party at an early age was more for the parents. Really, what will the baby understand? I did not want Danith and me to be seen as those parents who used their baby to throw a bash for themselves. Nora, after all, couldn’t even feed herself a full meal and still needed help with climbing down the stairs. What would she know about the day she was born on? Nothing. She wouldn’t even feel a day older. And, she would never, ever recall the occasion. So, a cupcake at home, with just her parents and her grandmother, would adequately serve the purpose of recognizing her big day. But my reluctance wavered when it hit me: our daughter hadn’t been celebrated or adored at a baby shower before she entered this world. No one guessed her weight and length, and no one drank pink punch in honor of her gender. At that time, a friend offered to throw us a shower, but I was hesitant to partake in such a festivity. And, now, I felt guilty for not having allowed Nora the opportunity to be celebrated, like other fetuses. It had not been fair to her.

In the few months preceding the party, I was engulfed in planning. I texted our play group during a road trip: I know it is early, so don’t laugh, but save the date! On many nights I sat up in bed and perused Pinterest for ideas before I finally settled on light pink roses as the inspiration for the party. I just want the day to be pretty, I answered an out-of-state friend when she asked me about the theme. After Christmas I designed the invitation to have large open roses at the top. I built the menu and amended it about ten times: fried rice, fried noodles, two different types of shrimp, dumplings, egg rolls, meatballs, chicken strips, and salad. I ordered two types of cakes and also cupcakes, which would share the dessert table with clear vases of Kisses, trays of fruits, and trays of cookies. Our drink table would be overflowing with sparking water, strawberry punch, and beer and wine for the adults. During the latter stages of planning, a couple of friends commented on the abundance of food we would have. Of course, it was ridiculously too much. All of it was getting to be too much. I know, I said to them, but, you see, Nora didn’t have a baby shower.

So, on the cool and sunny March morning of Nora’s birthday, her aunt and uncle and I set out to decorate the classrooms at the historical building. Mason jars of eucalyptus seeds and pink spray roses sat at the center of each table. Wreaths of oversized pink roses, whose shade was as light as Nora’s palms, and greenery hung on the walls. Pictures of Nora, one from each month of her life thus far, dangled down a blackboard with strings of white silk ribbons. Tulle of blush-like pink draped down the wall behind the dessert table. A line of shimmering pink and white balloons would serve as the backdrop for when Nora bit into her first cupcake, our version of the smash cake. We set up a table with a poster and pamphlets of the charity that we asked any gifts be made to. We set up an activity table with Play Doh and coloring pages for older kids and a play area with barnyard animal balloons for the younger ones. We would have guided activities of origami-making and paper flower-making for both children and adults. All of our young guests would leave the celebration with a book wrapped in pink paper as a party favor.

And our friends began to arrive. Many drove only a few miles from their home, but some drove in from nearby states. Many had already met Nora, but for some, this would be their first time. I had imagined carrying Nora and holding her up to each person as he or she entered the old school, almost as though Nora were Simba. But, oftentimes, I couldn’t find Nora that day. Our daughter, donned in a coral-pink dress with pintuck pleats around the waist and a white cardigan with scalloped edges, had learned to fully walk just a month earlier. Now she independently toddled from one group of guests to the next. She was also busily and jubilantly playing with the barnyard animal balloons, hugging her same-sized friends, and cruising from table to table, room to room, sometimes with a small entourage of little folks trailing her. And the big folks (the ones who are her parents’ friends) adored her. They allowed her to feed them. They indulged her antics of grabbing their belongings and stealthily walking away with them. They simply couldn’t get over how vibrant and engaging she was. And, later in the afternoon, when she was planted in her pink paper-flower-decorated high chair with the balloons behind her, she clapped her hands and shrieked with laughter. And everyone — everyone who was present, everyone who loved her and her parents — watched her with admiration and splendid wonder. 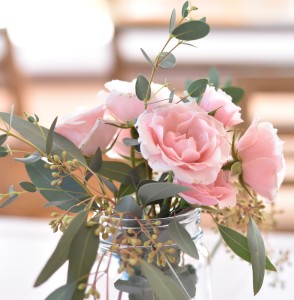 When I recall Nora’s first birthday, I immediately see abundance. Of friends filling the rooms. Of beauty, of laugher. Of generosity. And of love. Nora will never remember how the bright sun rays beamed into the classrooms or how our guests sang her praises. Fortunately I have a short video of us all gathered around her, about to sing happy birthday to her. It reveals her grinning with her mouth open at our friends, her hands quickly coming together, and her shrieking in pure joy. It reveals, too, her father, who wore a pink tie, proudly standing beside her; and me, who wore a dusty light pink blouse, leaning into her head once too many times to kiss it. More importantly, it reveals the many friends who came and shared in the special occasion with us, showering her with adoration and filling her parents’ hearts with what they had hoped for, even before she was born: that her life be celebrated and honored.