I grew up in a southern state with only two notable seasons: spring and summer (a long and arduous one).  After we got married, Danith and I lived on the West Coast where he described the trade wind as dry (as opposed to wet and muggy).  Into our second year of marriage, we moved to a state with seasons that could easily be cut into equal quarters. 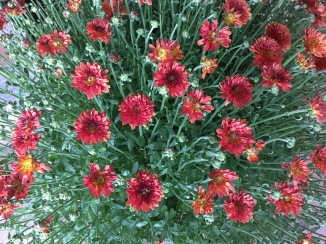 Here, autumn begins early.  The cool days themselves don’t necessarily have a head start over other areas of the country — the welcoming of the season does.  Here, most people eagerly hang up their orange and crimson leafy wreaths, pose their scarecrows with goofy smiles on a bench or a bale of hay, and adorn either side of their front doors with hardy mums — yellow, orange, red, and even burgundy.

Here, I get to witness firsthand what I grew up watching on TV and reading about in books.  The sound of dry leaves crushing under the shoes.  The sound of the rake scraping up fallen leaves with curled edges, sometimes the tines of the rake scratching the sidewalk.  The piles of fire-colored leaves.  The cool, hazy mornings.  The bright sky in the afternoons.

For many autumns, Danith and I turned those crushes and scrapes and colors into our reality.  At the apex of each autumn, I watched my husband gather fallen leaves from our Bradford Pears and maples on the weekends.  I listened to him grumble about our municipality unjustly requiring residents on our road to load the leaves into paper bags.  “Everyone else gets to sweep them into the street.”  I swept the front porch, cleaning off cobwebs.  And on the very first cool day, I began to visit nurseries and painstakingly picked out mums to bring home with me. 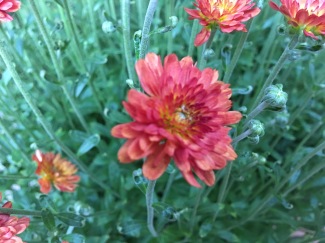 After a few years I learned that September was too early to buy mums.  The flowers would most likely dry up and shrivel up, leaving behind brown petals.  A friend once said to me that she watered her mums every day, and yet they died.  I shared with her what I had observed, “September has too many hot days still.  Don’t waste your money.”  But, while our eyes lingered on her backyard, she and I agreed  — her mums, when bursting with their yellow blooms, had looked beautiful in the center of her wooden lawn table.

Then, Autumn took a turn.  In the past, I had opened my arms to autumn not just for the colors, but to my visions.  I hadn’t decorated my home with pumpkins and grapevines and ribbons just to dress it up.  I had decorated it for what it had symbolized to me: a childhood dream.  My parents who raised me frequently argued, about three weeks out of a month.  Windshields were smashed.  Police were called.  Locks were changed.  When I was growing up, I would imagine the family life behind the doors that were trimmed with strings of leaves and baskets of mums.  In my simple childhood mind, that life must have been a happy one.  As an adult, in my reality, my simplistic correlation between a decorated autumn yard and the life behind its front door was proven.  My childhood dreams had been fulfilled, and my adulthood dreams were about to be.  Year after year, at the close of summer, I prepared myself to enter autumn with renewed hope.  This fall will be different.  I painted my hope with the vibrant, deep shades of rust and scarlet.  And then, finally, Daffy and Kiri happened.  This will be the fall.  Then they passed, both in the late of summer.  And I closed my eyes to the turning season.  Danith raked the leaves without me for an audience.  Our front porch trudged through each day like I did.  I spent most of my time inside, either at work or at home, where I did not have to acknowledge the changing leaves.

It is now a new autumn.  Danith and I are on a lunch date.  We are sitting outside, even having asked for a table in the sun, with no umbrella for shade.  The ice in my soda is melting, lightening the dark drink.  Danith’s eyes squint when he is talking to me.  Over my avocado and mango salad and his angel hair, we speak aloud our hopes.  We tread cautiously even though his face can’t hide his visions of our future.  My experience doesn’t let me rest or trust, but I can’t deny that our dream is picking up depth and color once more.  From Danith, I turn my eyes to the nearby flowerbed.  The restaurant put a jumpstart on decorating.  Slender brownish-orange leaves the size of my pinkie had fallen and now lie strewn among the yellow, auburn, and light purple mums.  I tell Danith how beautiful those flowers and leaves are.  I feel my chest opening to them, and I think about the mums that I have already set on either side of my front door at home.