The night we came home from the hospital, I slid into my neighbor’s car, and she drove us to a shopping plaza, where we parked beneath a crabapple tree.  Up the small hill opposite us, cars drove by, their headlights giving shape to a white Greek Orthodox Church.  I told my neighbor that I would be okay if I could have brought Daffy home with me from the hospital.  She nodded, but I knew that she did not understand, that she thought I had meant bringing Daffy home alive.  No — I knew that my baby had died.  I explained that if I could have brought Daffy’s still body home so that I could at least have it to hold every night, then I would be able to carry on with my normal life.  My neighbor, a therapist, proceeded to tell me that her mother, who had passed away many years earlier, was with her.  I had heard of such comments before, and my sentiment about them did not change that night.  I asked her how she knew that her mother was with her.  She said that she just knew, that she could feel her mother around her.  Feel?  What was the point of feeling someone’s non-existing physical presence?  I said that people spoke those words only to make themselves feel better.  Soon after, she drove us home.

I needed affirmation that I was not deformed or, worse, a marked, unfortunate soul who had sinned and was now punished with a dead baby.  When our house turned as dark and as quiet as the world outside, I lay alone in the nursery and scoured the internet, searching for stories of women who were like me.  I quickly came upon Glow in the Woods, where I learned about a woman who had driven up to her cabin with her husband in preparation for the birth of their baby.  The baby died, though.  He had died shortly before the delivery, and she did not know about his death until the delivery.  I followed the woman to her website, where I read in-depth about the son she lost.  She frequently wrote about feeling her son and seeing her son.  Seeing?  She saw him in the leaves around her.

My love for Daffy was real, just as her physical being had once been real.  She weighed less than one pound and measured only the width of my hands set side by side.  But the realness of my love for her was solid enough to anchor us down to the ocean floor.  I wanted that realness to live on, not to manifest into a theory that I couldn’t actually see or actually feel.  Or actually prove to others. 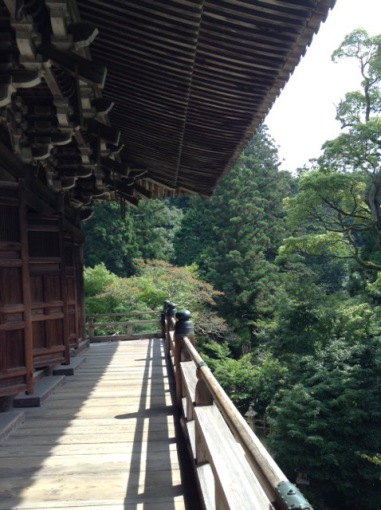 During the Japan trip that Danith and I took shortly after Daffy’s passing, I visited the Shosha-Zan Engyoji Temple on the mountains in Himeji City.  The Shinto temple is comprised of several smaller temples and shrines.  After a thirty-minute bus ride out of the city and onto Mount Shosha, I jumped onto a cable car that zip-lined me deeper into the mountains, where the temple complex rests.  I hadn’t wanted to visit the temple without Danith, but as soon as I arrived there in the midst of the woods, I felt safe and comfortable with just Daffy’s baby blanket.  I was so small in this forest of well-swept paths and trails, moss-covered grounds, and luscious, dense trees, some parting ways like curtains so that I could see down to the valley.  I followed a winding trail up the mountain and encountered the beautiful 1000-plus-year-old Maniden Temple.  There, I sounded the gong, offered a donation, and prayed.  I continued trekking on paths that led me to smaller temples and shrines, where I lit whatever candle that was available and prayed wherever I could.

I had decided to visit this ancient temple with the hope of feeling and seeing my daughter.  I had admitted defeat and was willing to believe in what others had spoken of, to believe in the un-provable.  I was desperate and would take my baby in any way I could, even if it was only in the idea form just to make myself feel better.  When I finally departed from the mountains and later sat on the hotel bed that night, I wrote to Daffy about the day.  Part of the letter reads…

When I decided it was time to leave, I retraced my steps down the mountain, holding your blanket close to my body.  I recalled the many blog entries that a tormented mother who had lost her baby at full-term wrote; she was able to feel her baby around her.  She would look up at the night sky, find a shooting star, and know that it was her baby.  She even wrote about feeling her baby nearby when she was up at her cabin.  I wanted the same experiences with you, Daffy.  I tried so hard to conjure up your being.  I penetrated the surrounding trees with my eyes, willing you to blow at the leaves just to give me a sign that you were with me.  Once, when a bee buzzed at my chest, I remained still just to see if it would linger in my presence, in case it was you.  It didn’t—it flew away rather quickly.  I spoke to you (when no one was around) and then ran my left hand down my right arm to search for goosebumps, in case you were nearby and were breathing on me.  There weren’t any puckers on my skin.  I spoke your name over and over as I besought the trees to speak back to me, to tell me about you.  None did.  It didn’t matter, though.  The lack of response from you and the universe did not matter, not on this day.  (Daffy, I don’t know where you are right now.  At this time in my grieving, I don’t know if you’re a spirit that will always keep me company, like so many people have said, or if you’re up in heaven waiting for us to be reunited, like so many other people have said, or if you simply ceased to exist.  Up until today, all three possibilities were my worst nightmare.  To quickly explain it: I didn’t want you to be a spirit or up in heaven or turned into dust, because I wanted you to be with me, physically, so that I could squeeze your arms and suck on your lips.)  What mattered today was that I felt you in my mind and heart.  Today it was just I who communicated, who reached out.  Today, I am okay with that.  I am your mother, and I will take whatever of you I can have.  Simply put, baby girl, you don’t have to do anything to keep memories of yourself alive.  I will do all the work.  I don’t know about tomorrow.  Tomorrow, I might need to know where you are.

Always loving you, Your Mom

I couldn’t achieve what my neighbor or the other mother had achieved.  Daffy did not reveal herself to me on the mountains that day, not in sight or feel.  But, in a different way, I found my baby.  She existed nowhere in the outside world that I could see  — not in the trees or in the wind — but in my head and my soul.  And both are very, very real.